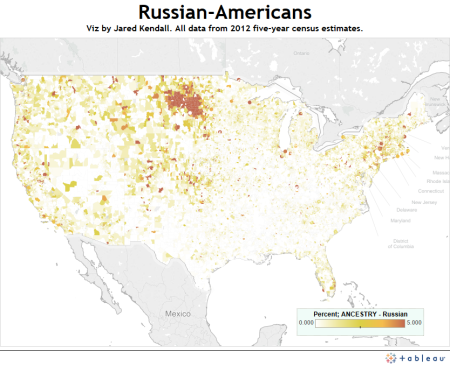 I expected to see a strong concentration of Russians on the East Coast near New York City, for whatever reason. I was wrong. The region of the United States with the highest percentage of Russian ancestry is actually off in the Dakotas – perhaps testimony to the Russian ability to live through blistering summers and polar winters… Or perhaps not. Either way, I was surprised by the results – and that’s always a good thing. 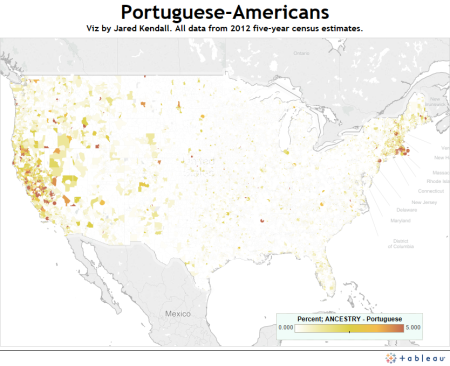 The Portuguese favor two locations in the United States – Massachusetts, and Southern California. Outside of those small enclaves, they’re nearly nonexistent, creating a vast empty expanse when mapped.

I would imagine someone with some knowledge of Portuguese history could shed some light on why their descendents are found in those areas – the map, as it stands, is just a tantalizing clue in need of further explanation.

If you’re a Lithuanian in America,  you are not alone. But you’re close. Lithuanians are few and far between, representing one of the smaller demographic segments of the population.

In fact, out of fifty ethnic and racial ancestral demographics, Lithuanians came in tied for #36 in my list of ethnicities with the greatest number of zip codes where they’re the largest ethnic component. There was one zip code in the United States where there were more Lithuanians than any other ethnicity – zip code 17974, in Schuylkill, Pennsylvania. In that single zip code, Lithuanians make up 29.6% of the population. Go Schuylkill! Of course, that isn’t even a proper zip code – it’s a p.o. box zip code, which means it doesn’t show up as an area on my map – it shows up as a little circle that’s difficult to spot. Think of hunting for it as a Lithuanian version of “Where’s Waldo?”

Here’s a link to my Lithuanian Tableau tool:https://public.tableausoftware.com/profile/jared5561#!/vizhome/supercensus/LithuanianAmericans

Some ethnic groups spread out to fill every nook and cranny in the United States – Germans, I’m looking at you! Others, like the Norwegians, stick to one region and don’t stray far. For the Norwegians, the northern stretches of the Great Plains clearly holds a special attraction.

Today, we look at Italian-Americans – a demographic strongly concentrated in the New York / New Jersey area.  While that’s certainly the largest Italian enclave in the United States, the smaller New Orleans Italian community also shows up – giving insight into one of the many populations which make up Louisiana’s unique (and delicious) ancestral blend.

Today we look at a widely dispersed segment of the American population – Scottish Americans. Scotts have a presence out west, in the New England region, and in a band along the Appalachian mountains.

Don’t have much to add – I *think* I’ve got some Scottish in my family tree — but I’m one of those mongrel Americans with so many different ancestries, calling myself American seems simplest at this point. 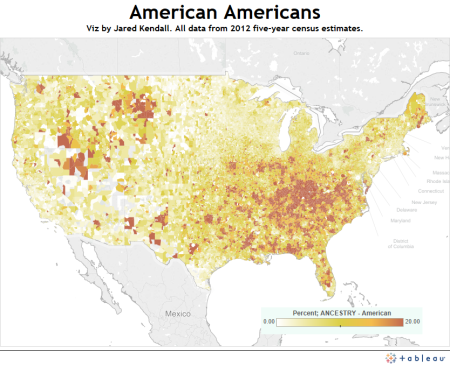 After spending some time looking at ethnic heritage in America, it’s time to turn to a new demographic: Those who respond, when asked for their ethnic background by the census, as “American.”

This ethnic/ancestral type reflects, presumably, Americans who no longer know, or no longer care, about the various derivations which contribute to their family trees. They’ve become a modern, generic homogenized ethnicity – the American-American.

I suspect I’m close to joining the American-Americans. I’m a little hazy on my family tree, beyond the knowledge that I’ve got some German, some Welsh, some Scottish and English progenitors. With such vague, and diverse, roots, simply calling myself “American” makes more and more sense to me.

Today I take a brief break from ethnicity to look at the percentage of residents in American zip codes who were born outside of the United States. This isn’t the same as the percentage of non-citizens, mind you, which I looked at separately, and which I’ve turned in to the Reveille. One of the major themes of my series on ethnic/racial heritage is that the United States is an immigrant nation – the primary difference between each immigrant group is order of arrival.

The map of foreign-born residents is the simplest way to see where the newest immigrants have settled – where the newest addition to our mixing bowl can be found. Some may not be citizens, and there is no way at the moment to tell whether they’ll be able to become legal citizens of the United States. That debate is a big part of why I became interested in this data. However, legal or not, they’re here – and now we can see visually *where* they are. Originally, ancestry and ethnic mix seemed like a good, quick way to show that the United States is a hodge-podge of post-Revolution immigrants. Instead, I found the dispersal of different ancestries compelling. Many maps later, here we are.

Share with anyone you know living in the United States, but born outside her borders. They can see how many of their neighbors share their non-native born status.

A link to my Tableau visualization, which allows for more exploration of the data and the map: https://public.tableausoftware.com/profile/jared5561#!/vizhome/supercensus/ForeignBorn 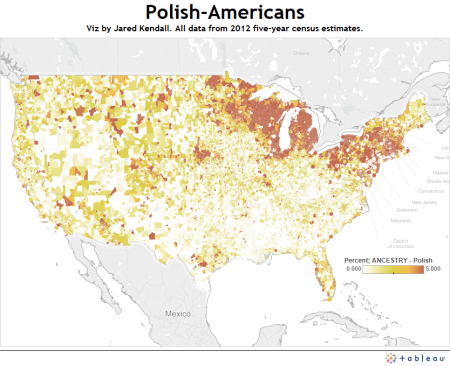 Polish-Americans are highly concentrated among the Great Lakes region of the United States, showing much less diffusion than some of the other ancestries I’ve looked at, like the Irish.

Aside from their fairly specific geographic distribution, the Polish-American population doesn’t hold many surprises. I had thought there’d be more Poles, but one problem with preconceptions about ancestry is that there are so many different ancestries which make up the American landscape that it’s difficult to get a handle on all of them at once, as well as their relative prevalence. When I approach the end of this project, I do hope to put together a single map showing multiple ancestral/ethnic groupings at once — but I’m running into technical difficulties, and it remains a challenging work in progress. Cross your fingers for me!

Here’s a link to my Tableau on Polish-Americans, so you can drill down, zoom in, etc: