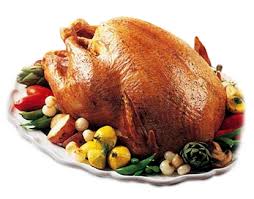 As we sit down to feast and avoid picking a fight with Uncle Pete, why not take a moment to reflect on all the great turkeys to go before? America hasn’t always eaten so much turkey, but after a mad dash to the top, the bird has apparently hit some sort of glass ceiling… Or glass coop, at least. Domestic consumption has leveled off, and only increases in exports appear to show much hope for turkey sales to really take flight.

Detailed analytics on the sad, sad state of affairs in my most recent brand awareness campaign. Market penetration isn’t what I’d like it to be.

Everyone knows big data is green, but what *else* is it? Graphic linked from http://orangutanswing.com/wp-content/uploads/2013/01/big-data.jpeg.

An example would be taking voter records for a locality, and cross-referencing them with gun registrations to arrive at gun ownership rates by party affiliation. This new dataset was not the purpose of either source set. Both have been repurposed, and the result, if comprehensive, is an example of big data. Big data also implies a responsibility to include as much data as possible. The same project, if it chose to discard Republican and Democratic gun owners while keeping independents, would not meet the standard of big data. Big data is comprehensive. Anything else is just data. And “just data” doesn’t tell us nearly enough.

Definitions are important. I’ve heard a lot of definitions of big data, and I’ve never heard one that I thought nailed it. In fact, most definitions sound like they’re frustrated, themselves, with the state of affairs. They’re cobbled together descriptions of symptoms, not a fundamental set of rules that tell us what this new thing truly is. I may be wrong about what big data is, but I suspect I’m on the right track.

Big data needs to be big, and it needs to change the way we investigate information. With data being generated at such breakneck speed, the world can’t afford to look at it a tiny bit at a time. We need to gorge on it, digest vast chunks, and aggregate the small truths you can’t see if you only look at part of the story.

The Reveille put up our latest update on the Associated Press college football rankings ( http://bit.ly/1cFcYIq ), and beyond showing that one voter pegged the Tigers as the 20th-best team in the country on his ballot this week, I found some interesting results in the pollster sentiment maps for Stanford, Ohio State and Baylor. The sentiment map is simple — it averages the ballot ranks for pollsters in a given state, then compares the states to one another to see where pollsters live who love a team, and where the ones live who hate a team.

This week, the most interesting thing I found in the weekly sentiment maps is the impression they can give of a California championing Stanford against a nation more keen on Ohio State or Baylor.

After checking out Stanford and their west coast support, compare that to the map for Ohio State: 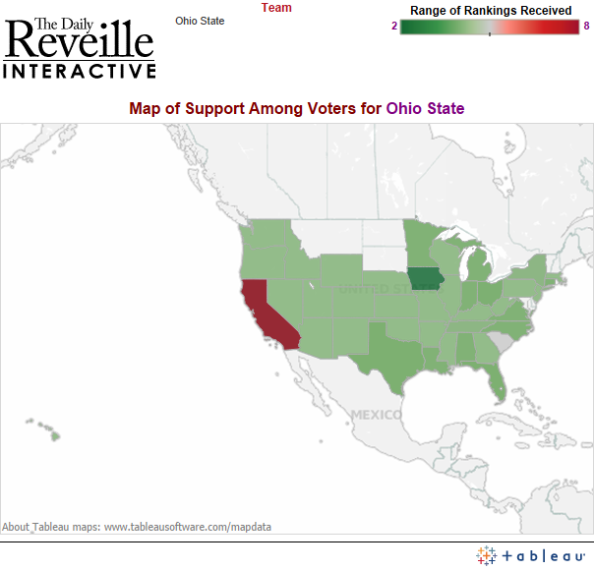 Or you could look at Baylor, which is quite similar (at least at first glance) to the map of sentiment generated for Ohio State:

Now, sentiment maps like this aren’t proof of regional bias… But if regional bias *does* exist, we would certainly expect to see it in the map. More updates as the season continues!